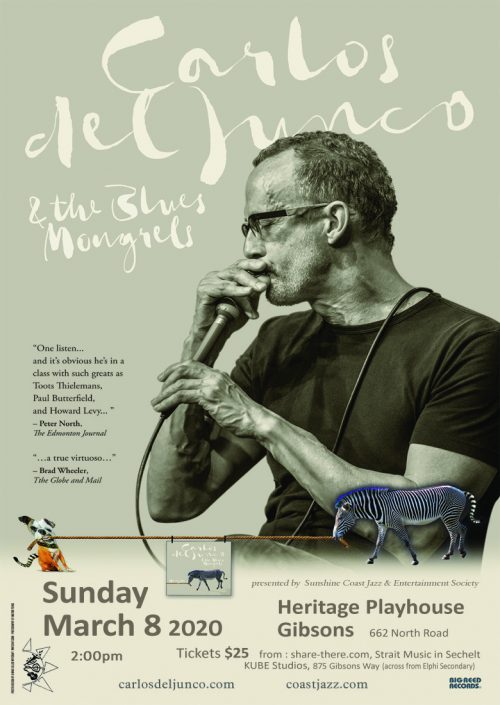 Eight time Maple Blues winner, BIG REED RECORDS recording artist Carlos del Junco and his Blues Mongrels return to the Heritage Playhouse after the success of last year’s show.. As one magazine reviewer said: “…if you think what he can do in the studio is jaw dropping, you have to see him live to get the gist of his uncanny ability.” (Jeffrey Morgan, Creem Magazine). A case in point, he opened for Ray Charles in 2003 at the Sony Centre and sold out of his 150 CDs in the 20 minute break before Ray came on!

Carlos del Junco has toured many parts of the globe and is considered one the world’s top living harmonica players. He’s released 7 solo (band) CDs and 3 duo collaborative CDs. A dynamic live performer, he’s played virtually every major blues, folk and jazz festival in Canada. In addition to two Juno nominations, del Junco won two gold medals for both blues and jazz categories at the Hohner World Harmonica Championships in 1993 in Germany.

Get ready to trash all you thought about the harmonica, Carlos del Junco and The Blues Mongrels deliver a no holds barred display of melodic fun and virtuosity.

“One listen to the man who bent his first notes on a harmonica at the age of 14 and it’s obvious he’s in a class with such greats as Toots Theilemans, Paul Butterfield and Howard Levy of Bela Fleck’s Flecktones.” – Edmonton Journal