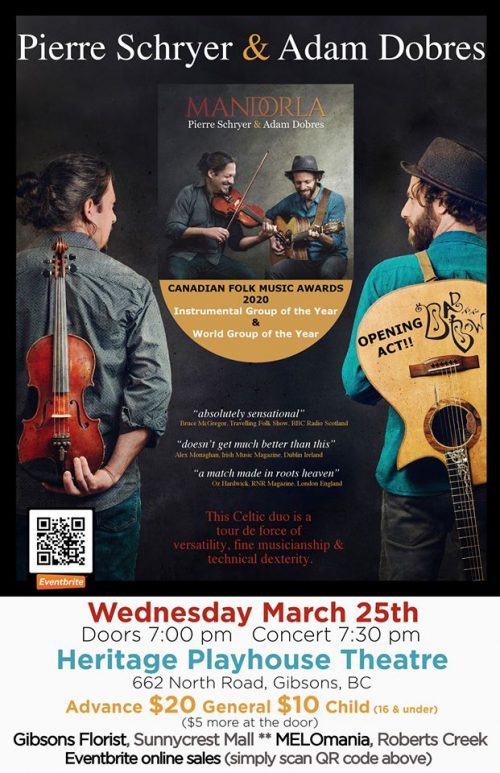 Don’t miss the mighty duo of Pierre Schryer & Adam Dobres as they come to Gibsons, BC! Their opening act will be Bad to the Bow (lead by Gabriel Dubreuil)
Tickets Advance $20 General / $10 for Children (16 & under) * ($5 more at the DOOR)
Eventbrite online: https://tinyurl.com/tlq96pq
* other fees may apply, for online sales.
Physical tickets available at MELOmania, Roberts Creek and Gibsons Florist
Experience the magic of this phenomenal Canadian Celtic duo – fiddler Pierre Schryer and guitarist Adam Dobres. Schryer & Dobres show will surely delight, as this duo is a tour de force of versatility, fine musicianship and technical dexterity. They are about to release their new album called “Mandorla” which features an eclectic array of musical gems from across the globe including traditional and contemporary tunes in various styles from far reaching places including Canada, Ireland, Algeria, Brazil, Quebec, and more. Together they represent two diverse and successful music careers laden with awards and nominations including JUNO, Canadian Folk Music Awards, Western Canadian Music Awards and Grammy Awards. Their first connections were in Victoria, BC through friends, and collaborations on festival stages and recordings. Several tours and musical projects later, the duo continues to appear at national and international festivals from the Pacific to the Atlantic and beyond.
More information at www.SchryerDobres.com
+ Google Calendar+ iCal Export