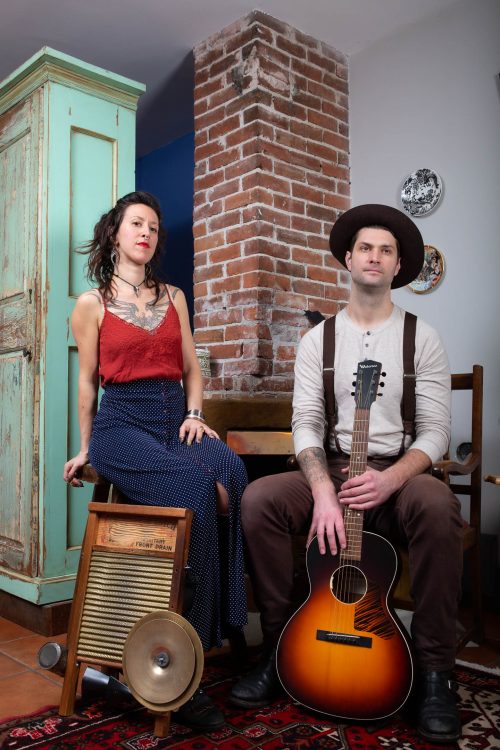 Taking vintage blues and jazz, swing, old-timey country and folk as their templates, this super-cool duo pens authentic sounding material that appears as if plucked from the Alan Lomax archives, but also bears the gritty qualities of their punk rock background.” – David Morrisson, Folk Radio UK

The Burying Ground formed in 2014 as a duo, but Woody Forster and Devora Laye have been playing together since 2009 as members of The Dire Wolves, an acoustic blues string band and darlings of the East Van punk scene. They are steeped in influences from 1920’s Ragtime, Country & Western, Mississippi Blues and New Orleans Jazz.

Woody’s complex blues guitar and rags are punctuated and raised high by Devora’s tightly syncopated washboard, with playful rolls and staccato jumps and stops. Their solo and combined vocal styling is deeply resonant and heartfelt. Devora’s sound when masterfully bowing the saw is transportive.

The Burying Ground has been charming diverse crowds, across all ages and musical tastes, in large and small venues throughout Western Canada and the United States. They focus on writing and performing original music while continuing the tradition of sharing songs from the past. Woody and Devora’s songwriting illuminates the human experience that reflects the modern day, touching on mental health, the trauma of war, social justice and good old-fashioned lost and found love.  It is today’s commentary on a framework of vintage music.

Their first three radio-charting albums speak for themselves, all lively, true, meaningful and memorable from start to finish – Big City Blues (2015); Country Blues & Rags (2017); and The Burying Ground (2017). They have just released their fourth album, A Look Back (May 15 2020).

At home, on the road and in the studio Devora and Woody are accompanied by a rotating cast of masterful session and backing musicians. Their current line up includes Wynston Minckler on upright bass, Clara Rose on fiddle & harmonies and Joshua Doherty on harmonicas and harmonies.
As a full band they have a lively and gritty sound with tight harmony and a driving rhythm section reminiscent of the music of the juke joints and jazz halls of the 1920’s and ’30s. The band moves effortlessly between toe-tapping dance music, the yearning of country blues and the embellishments and energy of ragtime and jazz.

Past and current additional supporting musicians include: