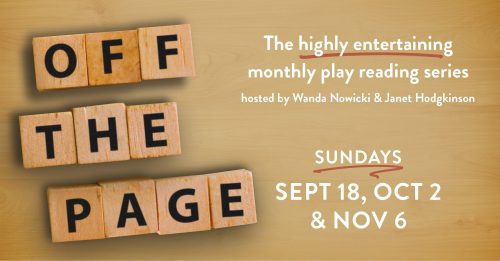 For 35 years, Brad and Suzy have been taking their folk songs to every godforsaken Legion and community centre in every godforsaken small town across Canada’s hinterland… even South Porcupine, Ontario. The audiences are getting skimpier and Suzy’s sparkle is starting to fade. But they keep on going. No matter what. To the bitter end. Like we all do.

James Fagan Tait is an actor, director and playwright from Cornwall, Ontario. He trained in theatre at Ryerson Theatre School in Toronto and Ecole Jacques Lecoq in Paris. He has lived in Vancouver since 1997. He has written and directed many plays including the award-winning “Crime and Punishment” for NeWorld and the PuSh Festival in 2005. His play “The Explanation” premiered in 2018 at The Cultch for the frank theatre company. Most recently he co-wrote and starred with Jan Wood in SAME OLD, SAME OLD at the Belfry Theatre in Victoria and currently he is the lyricist for FIN ‘AMOR (SONGS FROM A FORMER CRMINAL), a song cycle by Canadian composer Jeffrey Ryan, performed by tenor/hurdy-gurdy player Bud Roach to commemorate 50 years of decriminalized homosexuality.