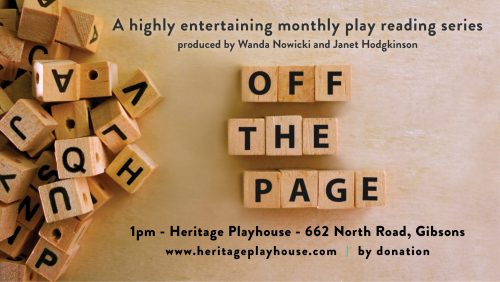 Admission by donation at the door.
Seat reservations required contact Janet at janetleahodgk@gmail.com or call 604 740-1485


NOTE: limited seating of 47 in bubbles of 2 or 3 people, MASKS MANDATORY and strict physical distancing rules in place.

RUFUS BROWN is a travelling insurance salesman. So is RUFUS BLACK. They are the same person. Pained by the deaths of his first wife and kids many years ago, Rufus has married both LOLA BROWN and CLEA BLACK. They are insurance against the grief of loss. Rufus spends alternate weeks with them, and drowns his sorrows at a bar. There, he meets JENNIFER, a detective who moonlights as a bartender.

Both wives suspect that Rufus is unfaithful. Independently, both Lola and Clea seek the advice of MADAME WANDA, a veiled fortuneteller. “Wanda” is actually RUFUS WHITE, a man who murdered his family years earlier and has never been caught. When they see the story of Rufus White on a TV show about “cold” cases, both wives denounce their Rufus – all the Rufuses look alike! Jennifer arrests Rufus Brown/Black for murder. Lola and Clea visit him in jail and promise revenge. But the real murderer has a trick or two up his sleeve …

David Copelin‘s produced plays include A Clean Breast, The Angel Capone, Bella Donna, Mind Over Matter, and a popular translation of Alfred Jarry’s Ubu Roi. A graduate of the Yale School of Drama, David has been a resident dramaturg at the Mark Taper Forum, Arena Stage, New Dramatists, and the Oregon Shakespeare Festival. He has also taught at several universities in the U.S. and Canada. David is a member of the Dramatists Guild of America, the Playwrights Guild of Canada, and Literary Managers and Dramaturgs of the Americas. His current project is Broken Water, a family drama. A dual citizen of the U.S. and Canada, David lives in Gibsons, British Columbia. He is represented by Michael Petrasek at Kensington Literary in Toronto.

Pamela (Cat) Delaney
Cat, an award-wining poet and playwright, was born and raised in northern England. She was educated at the University of Toronto, Athabasca University, and Ryerson, and continues her studies on an on-going basis. Published widely in periodicals, her work has appeared in Where Toronto Magazine, The Globe and Mail, Guelph Mercury, Formula, Pets Magazine, Homemakers magazine, Dogs in Canada, SpaLife, North American Inns, and Coastal Life, among others. Her non-fiction book, Shylock’s Last Stand, dealt with sordid business dealings and weird participants in Stratford, Ontario, and was published in 1997. Her social satire Welfarewell was the winner of the 2009 Samuel French competition, and is published by Samuel French out of NYC. For several years she was a manager and press agent for five racecar drivers in Formula 1 and IndyCar. Theatre has been in her blood all her life, from writing, directing and acting in one-”woman” plays from the age of 4 to the present day with 30+ completed one- and two-act plays for the stage; she also writes screenplays (two have been optioned), teleplays, poetry, fiction, non-fiction and boring things like annual reports, wills and newsletters, and teaches writing classes. An highly experienced website copywriter, she has written SEO-driven pieces on everything from losing 20 pounds in 20 minutes to what to do if your dog is allergic to beef. She is a member of the Playwrights Guild of Canada, and Playwrights Atlantic Resource Centre. Cat is an avid film buff, wine aficionado, traveller, art collector and reader, living near the coast in Nova Scotia with her collie dog, Skye, and five wicked, proofreading cats with manuscript veto power. Please visit http://www.catdelaney.com for more information.