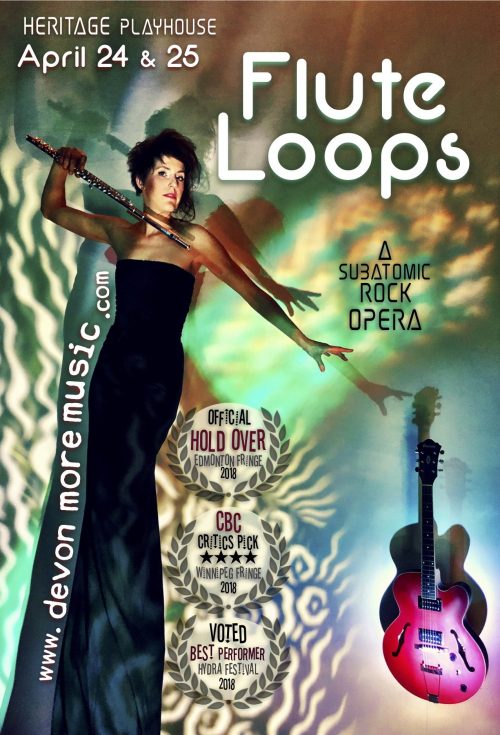 Quirks, quarks, strangeness, and charm collide with the substance of sound in a subatomic rock opera where anything that can happen does…

Meet The Flute Loops! Pop music’s latest viral sensation are about to take the stage..!

Meanwhile, the quantum physics PhD student working their “merch” table is trying to warp spacetime while heavily under the influence — of Saint Stephen Hawking. With the muses of theoretical math and classical music at her side, will she suspend the fourth dimension? Or command Thomas’ attention?

Featuring a singular live soundtrack, do not miss this genre-bending smash hit! Flute Loops was selected from over 225 productions to be an official HoldOver at North America’s largest theatre festival: the Edmonton International Fringe (2018).

I grew up in ʃəˈhwɛpəm (Secwépemc) territory, and am now a guest on the traditional, ancestral and unceded Coast Salish territories of the xʷməθkʷəy̓əm (Musqueam), Sḵwx̱wú7mesh (Squamish), səl̓ilwətaɁɬ (Tsleil-Waututh), Stó:lō, & qiqéyt (Qayqayt) First Nations.